Here at SPED-PACK Kft. we not only design and manufacture many pallets every day, but we also use hundreds of them every day to produce our unique products.

Storage and part of the transport is also done on these pallets. The same goes for our partners.
Recently, we have been receiving more and more requests from customers to create a pallet with a load capacity that is comparable to the load capacity of cheap one-way wooden pallets, but is also lighter and possibly cheaper. Furthermore, it was important that it should not contain any nails or glue that would make it difficult to recycle the excess rolls. 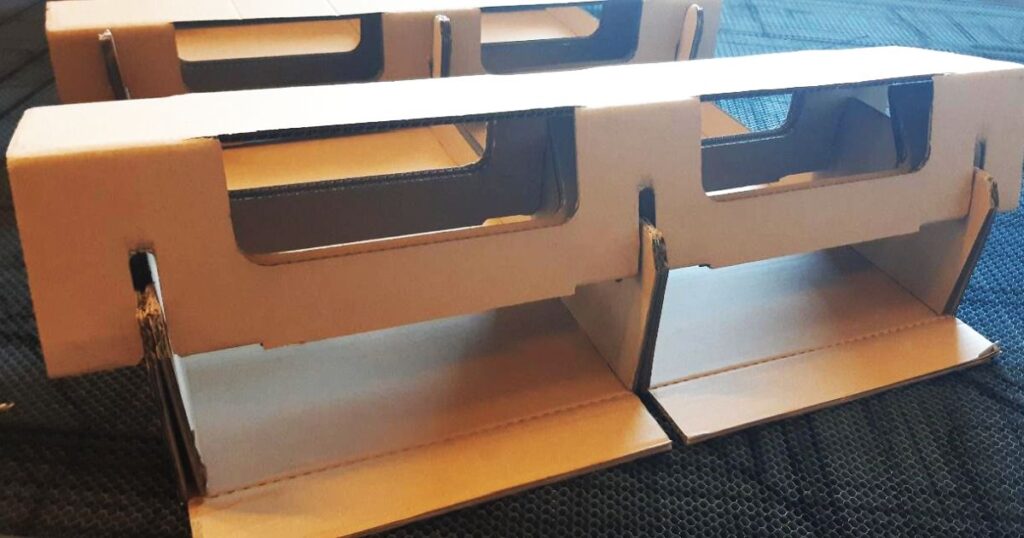 Our company’s main profile is the production of corrugated board, so the idea of a pallet based on corrugated board was obvious, as it weighs considerably less than wood. Conventional wood-based pallets, although they have a good load-bearing capacity, can become accident-prone if they wear out or break due to the small or large splinters and protruding nails. This problem is more pronounced in plants and users where lightweight one-way pallets are moved by hand.

In addition to the above, aesthetics are also a consideration, as well as the formation of dirt caused by fragments and sawdust falling off during the handling of the one-way pallet. And while we’re at it, it should be noted that the driver’s smile will not be genuine when he sees the forklift truck driver pushing a cheap pallet with a protruding nail across a new industrial resin floor. And as pallet manufacturers, it is safe to say that the market is primarily looking for a cheap one-way pallet, and the direct consequence of this is that the quality cannot match that of a new EUR pallet.

It is not possible to produce a perfect paper pallet, we can say that with absolute certainty, because everyone expects the load capacity and water resistance of a wooden one-way pallet from a paper pallet. Nothing, therefore, is impossible, but to meet such expectations would make the price of a paper pallet so high that it would not be value for money. All of this means that the first thing to clarify is what it is needed for, in what environment it will be used, how much weight will be put on it and yes, in this formula the end result could be that paper pallets are cheaper, better, easier to handle than their wooden counterparts.

To start the design process, we gathered 3 main aspects we wanted our product to meet:

We based the design of our pallet on the EUR pallet structure. As these pallets are structurally designed to provide a good load capacity, it was obvious to base our paper pallet on this design.

Figuring out the structure of the pallet was simple, based on the EUR pallet, but we also had to find a solution to meet the condition that no adhesives or metal parts were used in the assembly. For this condition, it was clear that the separate elements of the pallet would be joined by sliding them into each other. Thus, the final design was a combination of basic structure and interlocking, taking care to maintain the appropriate load capacity.

The right structure, although a key factor in load-bearing capacity, is not in itself sufficient. You also had to find the right material to match the structure.

First, we tried the strongest five-layer material we could find, which seemed the most obvious solution. However, during the primary sample production, we realised that although the material itself would be excellent in terms of load-bearing capacity, it was not what we had in mind. In order to be able to slide the materials into each other properly, it was essential that the material could be folded well. Unfortunately, despite a lengthy design process, we could not find a solution for our strongest base material that would prevent the base material from breaking along the folding edges, so we chose the second strongest base material in the series (2.70 BC). With this base material we were able to keep the pallet elements intact along the folds and it proved to be suitable in terms of load-bearing capacity.

Since the EUR pallets were used as the base structure for the pallet, the EUR pallet structure naturally also helped with the support points. The challenge here was to find the ideal support that would be suitable for the load, but would not interfere with the forklift/hand pallet lifter’s ability to move the pallet from either side.

The pallet size was defined as 800 x 1200 mm. This is the size we use and the most common size requested by our customers. The length of the loading area has been extended by 65 mm in both directions, this extension can be used as an edge protection when folded up if necessary. If this is not required in the given situation, it can be easily folded under the pallet.

The sample pallets were cut out using a laser plotter, which made the process of retesting after each modification much faster and easier. To do this, the pallet design was designed in ArtiosCAD, then converted to the appropriate format and cut on the laser plotter.

Although the laser plotter is a great help in the design process to quickly test a possible modification, it also makes for a very slow process in mass production, especially when, as in our case, we are dealing with a stronger/thicker material.

In this case, mass production is carried out on a cylinder die-cutting machine with the necessary die-cutting tool. With this production process, the production time is significantly shortened and we are able to produce larger quantities in a short time.

The use of pallets designed according to specific conditions was first introduced in our own production to evaluate the efficiency of the product.

In a first round, the operator colleagues started testing the pallets. In the course of their work, there may be situations where they have to move individual pallets, which they do using a manual pallet lifter. Because of the design of the pallet’s bottom, the main question was whether they could slide the pallet lifter forks into it properly and whether they would have any difficulty using the new pallet. In addition, there may be cases where empty pallets are moved from one place to another by hand, as in some situations this is the quickest solution, which is also made possible by the light weight of the pallet. The main consideration in this type of handling is to ensure that the pallet remains intact and does not slip apart, whatever the type of lifting.

As the manual movement proved successful, we moved on to the mechanical movement. We also tested the pallet with our forklift colleagues, where the resistance of the pallets was the first factor to be observed. In some cases, the forks of the forklift truck can bump into the pallet, which has to withstand this kind of physical impact, and here too, the ease of handling, how easy it is to move the pallet by machine, was an important consideration.

The paper pallet took the obstacles with ease, but it is important to point out that it is forbidden to slide the pallet with a forklift, as the material structure will crack under the enormous force.

Finally, we had to test the load capacity of the pallets, which we observed during storage. A particular concern was that the pallet should not only be able to withstand the weight placed on it, but also that it should easily support the stacking of the pallets.

We also subjected the sheets of paper to extreme tests to see what the limits are. The pallets can easily support a weight of 400 kg (20 EUR pallets stacked on top of each other) over a long period of time and do not break or weaken when moved, not only when stationary. 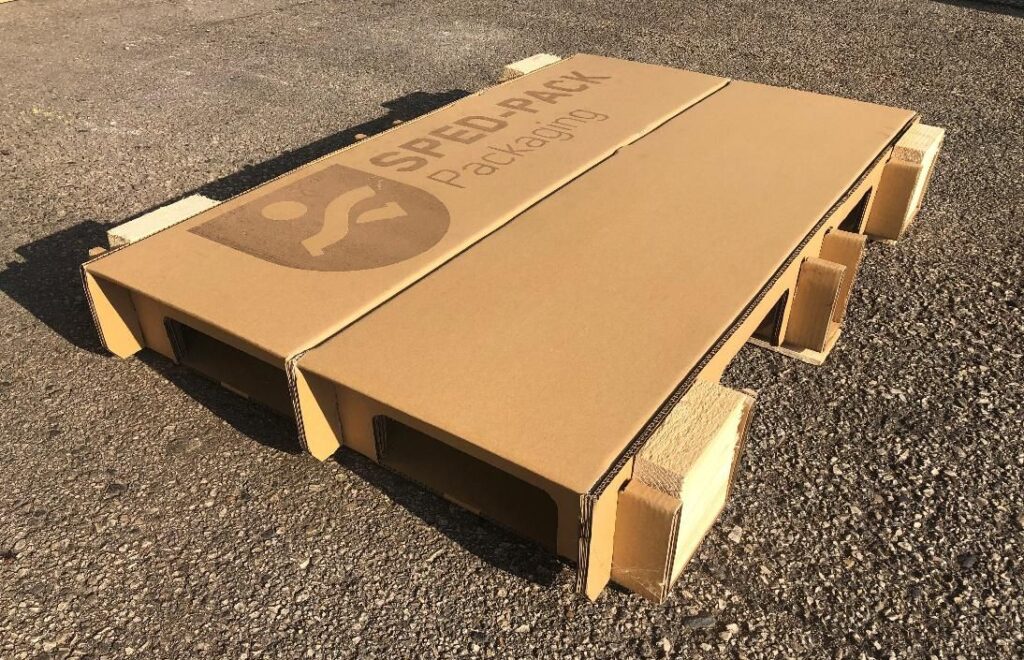 As we are keen to make the paper pallet waterproof, we broke the rules we had created ourselves and reinforced the paper pallet with wood. The joints were made with hot-melt glue. The idea was simple: the load on the surface would be taken by the pine cubes glued into the corners of the pallet, by which time the paper part of the pallet would have lost its strength to water.

During testing, we put the pallet in 20 mm of water, and since it didn’t collapse hours later, we stopped testing, saying we had achieved part of our goal. The success is not complete, because the pallet crumbles when removed from the water, but we are working on new ideas with some more wood to make a sturdy structure.

We use cookies on this website to provide the best possible experience for our visitors and to make our website more efficient. Cookies are small data files that the website places on your browsing device. Cookies save your browsing data so that the next time you visit our website, our site recognises your browser and can make your experience on our site more convenient. It also helps to ensure the smooth operation of certain functions, to keep our services secure and to improve our website.

You have the option to disable cookies and change your cookie settings. You can do this using the tabs on the left.

Some cookies are provided by third parties. This website is powered by Google Analytics, which collects anonymous information such as the number of visitors to the site, the most popular pages, and shows how visitors use the site. These cookies do not contain any personal data.

These cookies are used to help you use the website and provide essential functionality, without them the website cannot function properly. They allow you to remember information such as the language you have chosen, the contents of your shopping basket, sessions that are essential for the site to work (session cookies) or the look and feel of the website. These cookies do not contain any personal data. They are strictly necessary for the functioning of the site and cannot be turned off. I accept the use of these cookies by using the site.

You can see what cookies we use by following the link below settings. By clicking on the button you agree to the use of cookies.