When we were approached by a returning partner with this project, we had no idea how complicated it would be, even though we have packed many machines.

It is not particularly large in terms of its dimensions, 9 metres long, 3.5 metres in diameter and 14 tonnes. In machine packaging, these are not outstanding figures, especially the weight, as we have already had to deal with 52 tonnes. The diameter makes it an oversized load, which has to be delivered to the port by a truck. This does not cause any particular complications, but care must be taken to ensure that there are no deviations upwards from the predefined dimensions and weights. No excuses there! 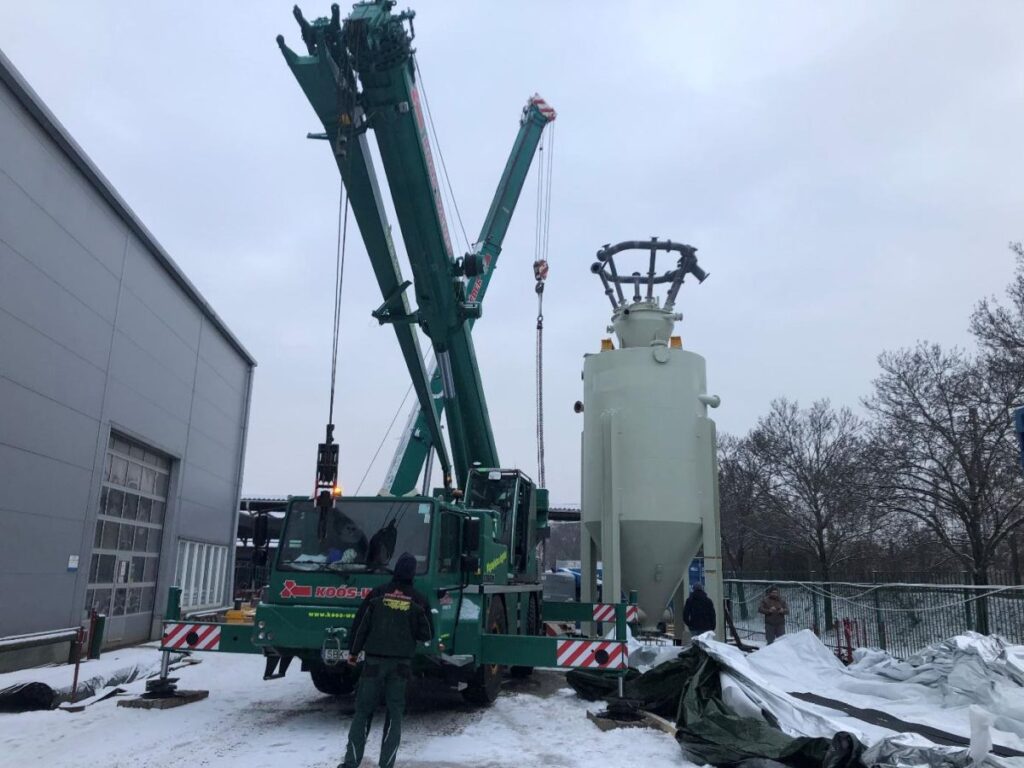 The place of departure was Hungary and the destination Japan. The Buyer had stipulated at the outset that the product must not be damaged. Let’s face it, it’s no small challenge to make such a promise on a piece of metal that size. In addition, the special feature of the tank is that its inner wall was tiled by hard-working Hungarian hands in 4 months with 1 cm x 1 cm ceramic tiles, because the inside of the tank will be exposed to a high temperature that steel alone can only withstand for a short time. The tank will be installed in the thermal power station. The peculiar nature of this combination is that, however modern and good the adhesive, unfortunately, the tiles will fall off the inner wall on impact.

Then, for reasons beyond our control, the project was so delayed that we received information at the end of December that we could start packing.

The packaging had to be planned in advance, drawn and documented down to the smallest details (pallet, wood sizes, thicknesses, type of foil) because the final customer who received the device wanted to keep an eye on every step of the process. Once we agreed on the final design, we started assembling the pallet in mid-January in the freezing cold outdoors. The ‘pallet’, which was 35 m2, weighed over 2 tonnes when finished and contained almost 4 m3 of high quality, heat-treated pine timber.

Placing the tank on the pallet went smoothly, with the help of two cranes it was placed in position with millimetre precision. Then, for five days, in snow and frost and gale-force winds, our colleagues worked on the pallet, which by the end looked more like a cradle than a pallet. The container was fixed to the main beams of the pallet at six points with strong ties, and the colleagues also built a circle around the container itself, not only protecting it from external damage, but also forming a complete transport unit. 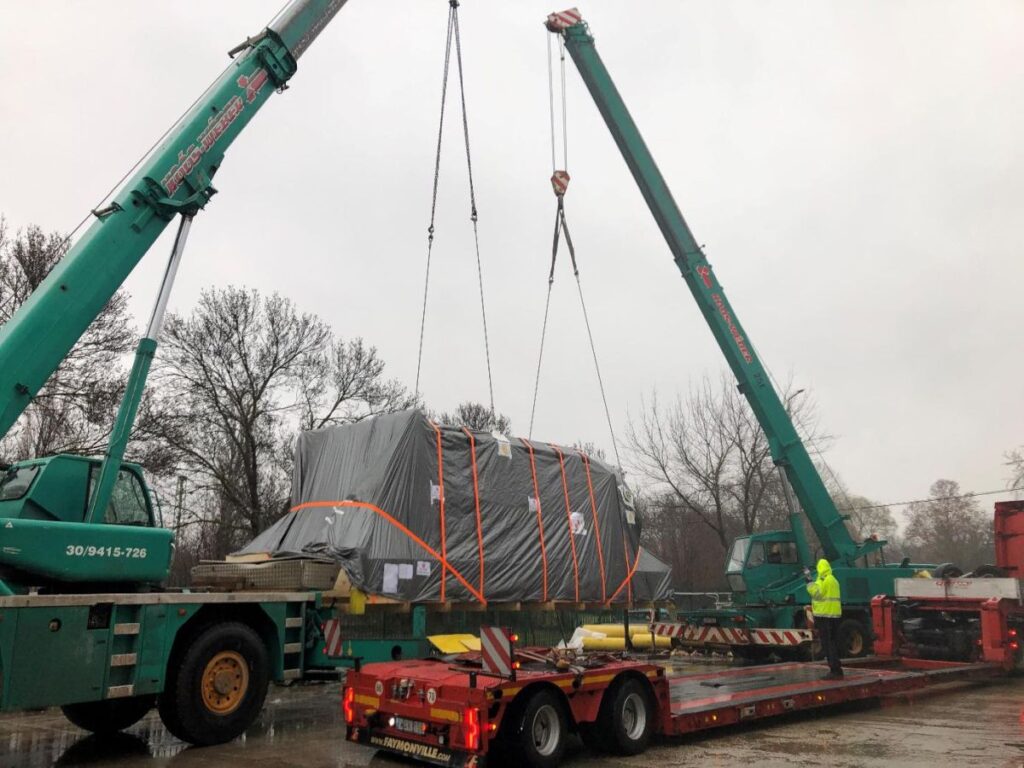 Even the foils that had been put on before the container was tilted were knocked down and sealed, so our package was beginning to look final. I’ll pause here for a bit and explain in more detail why a sub-task as short as foiling is not. On the one hand, you have to work with huge dimensions outdoors, in windy conditions, and even if it doesn’t tear apart, more than once a 100 m2 of foil can easily be torn out of your hands by a softer breeze.

Furthermore, for mechanical protection, we used more than one type of film and not just one layer. First of all, we wrapped the protruding pointed parts and edges with foam foil to prevent the foils from tearing. Then a layer of laminated foam air cushion foil was used as the inner layer, 2 mm foam foil as the middle layer and a layer of laminated foam air cushion foil as the outer layer. The whole is surrounded by a composite film specifically used for marine packaging to provide an airtight seal for corrosion-prone equipment. The package also includes a giant waterproof tarpaulin.

In the final stage, warning labels were applied to the package and the machine was secured to the pallet once more with 8 reinforced 5 T spanifiers.

This was not the end of our work, because we undertook to supervise the loading, to wrap the wire ropes used during loading immediately after the tank has been loaded on the car, because the customer will need this during the unloading.

On the day of the loading we had spring temperatures of plus 3 degrees and all-day soaking rain waiting for us at the site of the operation and despite the fact that the crane was difficult to lift, we managed to complete the task. We were able to secure the pallet on the low loader truck in a reassuring manner, so that we could set off for the port in the early evening.

We use cookies on this website to provide the best possible experience for our visitors and to make our website more efficient. Cookies are small data files that the website places on your browsing device. Cookies save your browsing data so that the next time you visit our website, our site recognises your browser and can make your experience on our site more convenient. It also helps to ensure the smooth operation of certain functions, to keep our services secure and to improve our website.

You have the option to disable cookies and change your cookie settings. You can do this using the tabs on the left.

Some cookies are provided by third parties. This website is powered by Google Analytics, which collects anonymous information such as the number of visitors to the site, the most popular pages, and shows how visitors use the site. These cookies do not contain any personal data.

These cookies are used to help you use the website and provide essential functionality, without them the website cannot function properly. They allow you to remember information such as the language you have chosen, the contents of your shopping basket, sessions that are essential for the site to work (session cookies) or the look and feel of the website. These cookies do not contain any personal data. They are strictly necessary for the functioning of the site and cannot be turned off. I accept the use of these cookies by using the site.

You can see what cookies we use by following the link below settings. By clicking on the button you agree to the use of cookies.